The group of skeptics includes Drs. Søren Christiansen and Henrik Støvring from the Department of Public Health at Aarhus University in Denmark and Dr Philippe Autier, epidemiologist from the International Institute for Prevention Research, Lyon.

In an article published on June 23 in the European Journal of Public Healththey state that breast cancer mortality has decreased over the past three decades due to improved patient care and better therapies, while the number of women to be invited for mammography screening in Denmark to prevent one cancer death in 10 years has doubled.


“As the beneficial effects of mammography screening diminish more and more, we should consider abandoning the current mammography screening program with biannual mammograms for all people aged 50 to 70. Perhaps a A more targeted, high-risk screening strategy could be an alternative, if studies show the beneficial effects of the strategy,” said Støvring, associate professor in the Department of Public Health at Aarhus University. AuntMinnieEurope.com.

“I think we’re approaching a point where just continuing might become ethically untenable, because fewer and fewer women will experience gains from screening (they wouldn’t die of breast cancer from through better treatment anyway), but the number of women injured due to overdiagnosis and overtreatment remains constant,” he noted.

Meanwhile, proponents of screening reiterate that early diagnosis through breast screening is the key factor in reducing mortality and believe the group’s results are skewed.

The study was based on 10,520 breast cancer deaths among Norwegian women aged 50 to 75 between 1986 and 2016. The authors said the findings were also applicable to the Danish population. 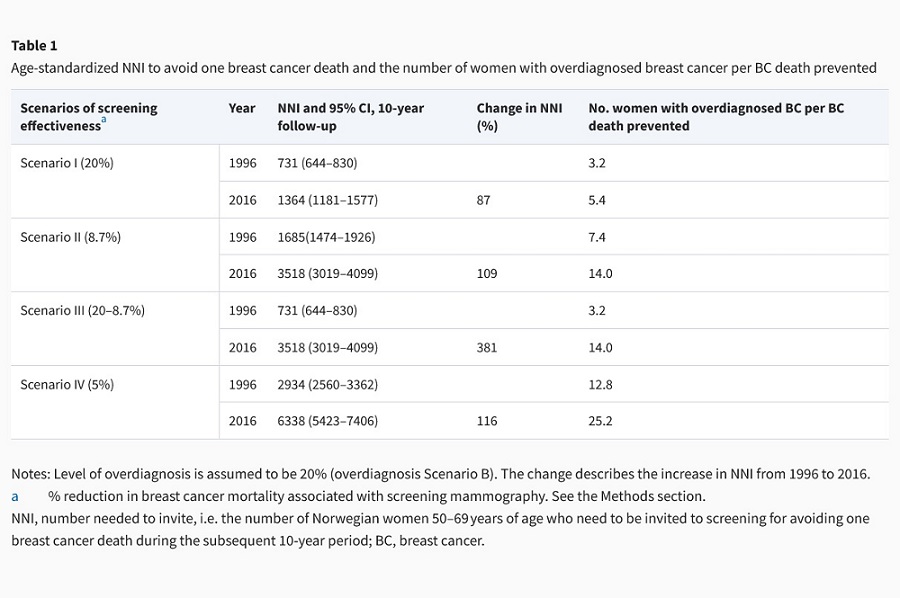 According to the authors, improvements in therapy over the past 30 years have reduced mortality, which may erode the benefit-harm balance of mammography screening. They estimated that in the baseline scenario of 20% reduction in breast cancer mortality and 20% overdiagnosis, the number of women who need to be invited (NNI) for mammography screening to prevent one cancer death in 10 years went from 731 (95% confidence interval [CI]: 644-830) women in 1996 to 1364 (95% CI: 1181-1577) women in 2016, while the number of women with overdiagnosed cancer for each breast cancer death averted increased from 3, 2 in 1996 to 5.4 in 2016.

According to the authors, this shows that the benefit of mammography in terms of reducing mortality decreases while the disadvantages such as overdiagnosis are not affected. Screening leads to both overdiagnosis and overtreatment, which has both human and economic costs, they argue.

“One in five women between the ages of 50 and 70 who are told they have breast cancer have been diagnosed ‘unnecessarily’ because of screening – without screening they would never have noticed or felt that she had breast cancer during her lifetime,” Støvring noted.

In Denmark, women between the ages of 50 and 69 are asked to have a mammogram every two years. According to Støvring, a conservative estimate of the costs of the screening program would be at least 500 million Danish kroner (67.2 million euros) per year in a population of 5.8 million Danes.

“Healthcare professionals are a scarce resource in our healthcare system, so we should ask ourselves if it would be better to spend their time treating other patients, as the benefits of mammography screening are dwindling. “, did he declare.

The authors further believe that future improvements in the management of patients with breast cancer will increasingly reduce the risk-benefit ratio of screening.

As a recent participant in a colorectal screening program, Støvring has no problem with screening per se, but for breast cancer he thinks the evidence for mammography screening is unconvincing.

A pioneer in breast imaging and an advocate for early detection, Dr. László Tabár, professor emeritus at Uppsala University in Sweden, challenged the authors’ claims that the impact of early breast cancer detection has decreases.

Exactly the opposite has happened, he noted, citing extensive studies of ongoing population-based screening services that show a 50% decrease in breast cancer deaths, attributed to early detection and treatment in the early phase. He pointed out that implying that the benefits of mammography screening were declining was an “unfortunate and deliberate fabrication”. 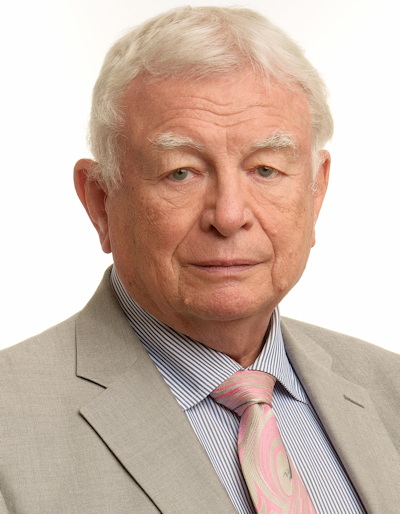 “Our research group made a contemporaneous comparison between the group that participated with the group that did not participate in mammography service screening, which allowed us to assess the independent impact of early detection,” said he declared. AuntMinnieEurope.com.

“Dr. Støvring is unfamiliar with the 29-year follow-up results of the largest [randomized controlled trial]the Swedish two-county trial, and also ignores the most recent publications of the ongoing national, population-based mammography screening, which assessed the incidence of fatal breast cancers within 10 and 20 years after diagnosis in more of half a million Swedish women aged 40-69,” he added.

Regarding the relative impact of early detection and treatment, Tabár noted that in countries with established mammography screening programs, cancer registries do not have information on the mode of detection (i.e. that is, whether cancer was detected among those who participated in the screening versus those who did). do not participate) and therefore the relative impact of screening versus treatment on reducing breast cancer mortality cannot be assessed based on registry data.

The authors’ claims appear to be taken from the air and have no scientific basis, he said. He also took issue with the title of the article, pointing out that randomized controlled trials never tested “screening” but “invitation to screening”, and that this meant that mortality among those who were invited but did not had never been there was also included in the results. make a correct comparison with the control group.

Evaluation of vaccine efficacy against Omicron BA.5 and BA.2 in Portugal