Thousands of people in Amsterdam defied the ban on large gatherings on Sunday as they took to the streets to show their displeasure at restrictions aimed at curbing the spread of the coronavirus.

Protesters gathered in the city center before marching to a park in the Dutch capital where a rally of the populist Forum for Democracy took place.

A small group of protesters briefly clashed with riot police as officers struggled to evacuate the crowds from Museum Square.

There have been reports of at least one person being detained

Most of the people answered the call to disperse, given by loudspeaker, from the square in front of the Rijksmuseum.

Before the officers moved in, people near the Van Gogh Museum unfurled a banner that read: “Less repression, more care.

A group of people in white overalls and white masks held up signs, including one that read: “This is not a virus, it is about control” on one side and “Freedom” on the one hand. ‘other. 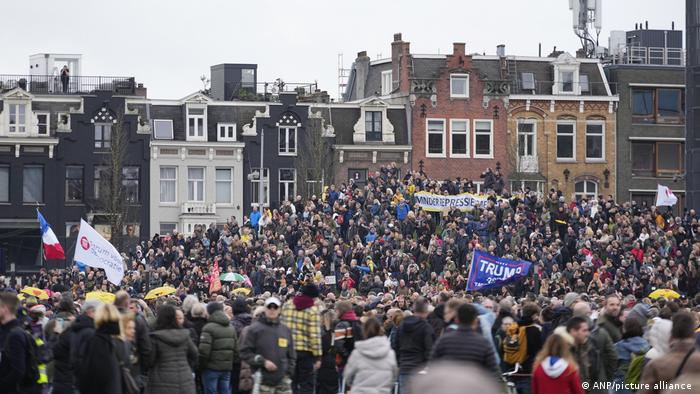 The Netherlands is currently under a strict lockdown, which is expected to last at least until mid-January.

Despite the rapid spread of the highly contagious variant of omicron, rates of coronavirus infection in the Netherlands have gradually declined in recent weeks.

Cases have been dropping since the country reintroduced lockdown measures in November, before tightening them further during the holiday season.

The municipality then issued an emergency order for people to leave the square. Riot police marched on the grass to clear the area, sending protesters to nearby streets.

Omicron and holiday gatherings could both contribute to COVID spike, CDC also gives green light to boosters for some children

The doctor says the omicron variant is on the island; recent holiday gatherings, vacation trips and gatherings led to increase in COVID-19 cases | Guam News

Gatherings of four households “just not sure”, warns CMO