A new, highly effective shingles vaccine will soon be offered to over-70s in the UK.

The vaccine, Shingrix, is widely available in the United States and is much more successful in preventing the painful viral skin condition than the vaccine currently offered by the NHS.

Studies have shown that Shingrix can reduce the risk of shingles by more than 90%, compared to 50% for Zostavax, which is currently offered to all Britons over the age of 70.

The Shingrix vaccine is currently given to a limited number of NHS patients, but the health service is expected to start offering it to many more this year.

It is thought the vaccine could be given to patients as young as 55 by 2024.

“It’s a game-changer,” says Professor Adam Finn, a member of the Joint Vaccination and Immunization Committee.

“The moment the US authorities saw the Shingrix data, they dropped Zostavax like a hot potato, and the same will happen in the UK. We will phase out Zostavax quickly over the next two to three years.

The news will come as relief for the millions of Britons at risk of developing lifelong chronic pain from shingles. More than 50,000 get it each year and almost one in four people will develop it at some point in their life.

Last October, presenter Eamonn Holmes revealed he had shingles in 2018. He was forced to miss ITV’s This Morning due to a rash that covered his face and caused him to intense shooting pains. Pictured: Holmes with Ruth Langsford on ‘This Morning’ 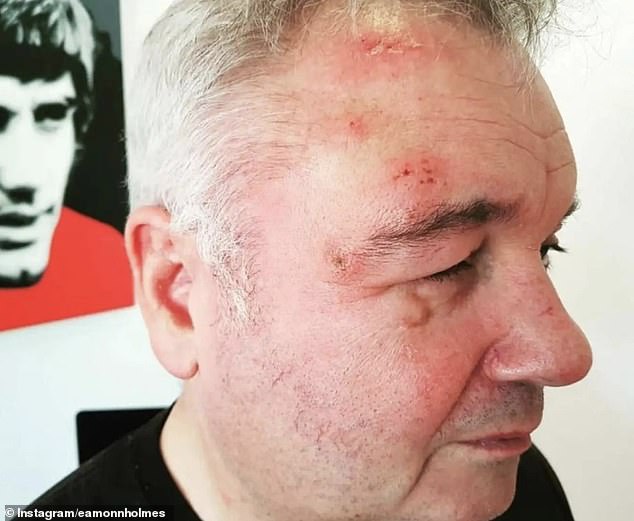 Shingles is linked to chickenpox, the highly contagious disease that causes itchy rashes.

If caught at a young age, chickenpox is usually not serious, but the virus that causes it, varicella zoster, remains in the body for life, hiding in the nerves of the spinal cord.

It is controlled by the immune system, but this weakens with age, potentially allowing the virus to reactivate and attack the body again.

People with shingles have a red, blotchy rash that blisters. It usually appears on one side of the chest or abdomen, but can be anywhere on the body.

Often accompanied by headaches and nausea, the rash can be extremely painful and last for several weeks.

Last October, presenter Eamonn Holmes revealed he had shingles in 2018.

He was forced to miss ITV’s This Morning show due to a rash that covered his face and caused him intense throbbing pain.

He said doctors were “really worried” when they saw the rash had spread to his eyelids, as the disease can lead to blindness.

For a fifth of patients, shingles can also trigger postherpetic neuralgia, a nerve condition that can persist for months and for which there is no treatment.

“The pain is there pretty much all the time,” says Dr Michael Serpell, a pain specialist at Stobhill Ambulatory Care Hospital in Glasgow.

“Even a cold breeze can trigger excruciating nerve pain in the face or chest.” 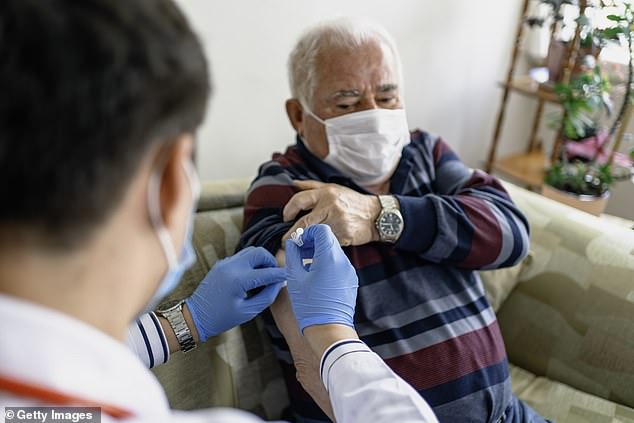 The Shingrix vaccine is currently given to a limited number of NHS patients, but the health service is expected to start offering it to many more this year. It is thought the vaccine could be given to patients as young as 55 by 2024. [File image]

Shingles can even kill, with around 50 deaths in the UK each year.

Britons over 70 are being offered a shot of shingles on the NHS and Zostavax has been in use since 2013.

“It was very helpful, but it’s far from the ideal move,” says Professor Finn.

Shingrix, created by British pharmaceutical company GlaxoSmithKline, was shown in studies published in 2020 to reduce the risk of shingles and post-herpetic neuralgia by more than 90%.

Importantly, studies show that the jab, which is given in two doses, provides strong protection in people over the age of 90.

The jab has been licensed for use since 2018, but high demand in America meant it was not generally available in the UK, so recommending it for NHS use was pointless.

It is only offered to NHS patients with weakened immune systems and for whom Zostavax can cause serious side effects.

Now experts say additional supplies mean a decision to use Shingrix rather than Zostavax is imminent. Professor Finn of the Joint Committee on Vaccination and Immunization said: “I expect we will make a decision on this in the coming months.”

The news will be welcomed by Joanne Mills, 56, from West Yorkshire, who has suffered from post-herpetic neuralgia for more than 20 years after contracting shingles in her 30s.

The mental health worker says the painful, itchy rash comes back at least once every two months and can last for ten days.

“I get it on my upper thigh and it makes wearing even loose clothes horrible because they rub against the rash,” the mother-of-three explains. “On a scale of one to ten, at worst I would say the pain is 11.”

Doctors believe a shingles vaccine would help reduce Joanne’s flare-ups, boost her immunity to the virus and bring her under control.

“Any shot I could get sooner that would help reduce the pain I’ve lived with for decades would be amazing,” she says.

Marui: Third Party Assessment of Board Effectiveness for FY2021